The daughter of British poet Lord Byron, Ada Lovelace was a Victorian mathematician. She worked with Charles Babbage on his calculating machines – he called her the “enchantress of numbers”.

At the time few women studied science or maths, and she is widely considered the founder of computing science and the world’s first computer programmer. 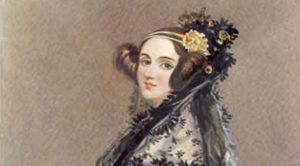 The British Science Museum argues she foreshadowed modern computing by a century, by understanding the ability of the calculating machines to “manipulate symbols rather than just numbers”.

Her notes on a translation of an Italian description of the machine include what is considered as the very first algorithm designed for machine processing. She also suggested the possibilities of such a device for creating graphics or music.