She believed opening up computing to business and non-scientific applications required simpler programming languages. Established wisdom was that computers didn’t understand English and it took years before her ideas were accepted.

But through her perseverance she developed a means of programming using words rather than numbers – most notably the COBOL (Common Business Orientated Language) language.

She was described by US talk show host David Letterman as the ‘Queen of Software’. 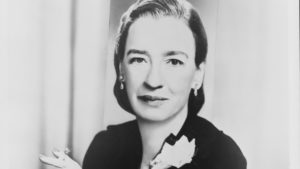