Clarke (later Murray) worked on the project to break the German Enigma ciphers. A Cambridge mathematician, she and the rest of the team built some of the earliest computers, known as bombes. These were used to decipher German codes. It is frequently suggested that their efforts shortened the war by up to two years. 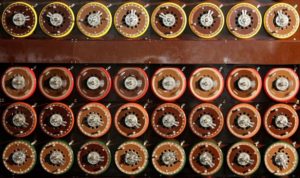 Clarke was originally employed as a clerical worker at Bletchley. Once she was promoted to work on code-breaking, she had to be officially designated as linguist, because there were no procedures in place for a senior female cryptanalyst.

She is reported to have taken great pleasure in completing forms with “Grade: Linguist, Languages: none.”