Margaret Hamilton was director of software engineering for the project that wrote the code for the Apollo Guide Computer (AGC). Developed at the MIT Instrumentation Laboratory for the Apollo 11 mission, the programmers literally had to start from scratch. 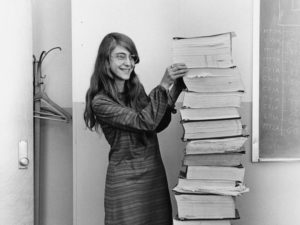 The team wrote the code for the first portable computer. Their work made the first moon landing possible and spawned a new industry. Hamilton became an expert in systems programming, but as she explained to Wired:

“When I first got into it, nobody knew what it was that we were doing. It was like the Wild West. There was no course in it. They didn’t teach it.”

The stack of papers in the image above is the code she wrote to help get the first men on the moon!